After ending on a high note last night, Lymelight Festival plodded to a start with the disappointing folk sounds of Rain. Things picked up slightly with Holly Pender, whose gentle acoustic sound gathered the first audience of the day and made up for the less-than-satisfying start to the day. 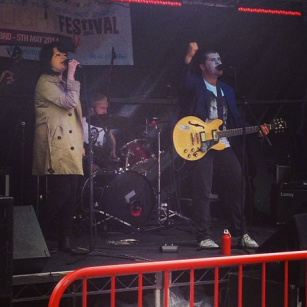 Covers band Baxter got the crowd ready for the first band of the day, The BlueYellows, whose breezy pop songs were characterised by simple piano sections and wah-heavy guitar. They went down well, and signalled the start of a good run of artists. Suburban Radio came up next, with a high-octane set that demonstrated their ska-indie talent and raw punk edge. With a fantastic cover of Bob Dylan’s ‘Blowin’ In The Wind’ (which featured a special appearance from local musician Nicola Jayne), the band finished up their set with an intense and passionate rendition of The Ramones’ ‘Blitzkrieg Bop’.

In The Cards were up next, with a nice brand of alt-rock/melodic metal that was perfectly executed with a stunning vocal performance. They may not have been to everyone’s taste, but they were definitely enjoyable and a nice change of pace. Dirty Vertebrae followed them up, producing a nice blend of reggae and rock that got everybody moving. The band gathered a big crowd, as not many people were able to resist the strong grooves of the band.

Vellocet headlined the day, bringing in a nice mix of psychedelia, rock and indie. It was a powerful and passionate performance, with a sizeable crowd enjoying every second of the set. The band then closed with a cover of Fatboy Slim’s ‘Right Here, Right Now’ – one which was well-constructed but fell short of making the same impression as their previous songs. It was a good end to the night, but I personally think the headline slot should have gone to possibly Dirty Vertebrae or Suburban Radio.