The final day of Newcastle-under-Lyme’s Lymelight Festival 2014 brought with it a mixed bag of performances. While there was less musical variety on display than there was yesterday, every act did their best to provide entertainment for the audience. And most were successful at this. 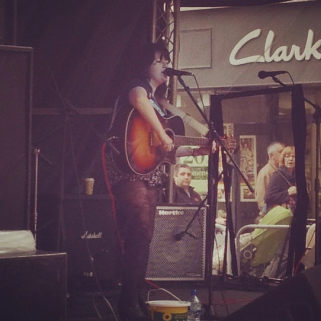 Brains For Breakfast was a fantastic opening act, with his catchy brand of acousto-pop gathering a crowd early on and being well-received – particularly closing track and latest single ‘Sway’. A good act, but one that Nicola Jayne (who also impressed us with her surprise appearance yesterday) was more than capable of following. With seamless simultaneous performance on acoustic guitar and harmonica, dazzling vocals and impressive songwriting, she proved herself to be one of today’s highlights. Her cover of Lou Reed’s ‘Satellite Of Love’ was a particular highlight, and was arguably better than the original. But the performance itself is also worth praise – blurring the lines between approachable and professional, Nicola Jayne had an instantly likeable stage personality and a way with the audience.

Covers band Sugar Rush are the next ones up, keeping the crowd entertained as they power through a diverse range of covers (some more successful than others). This is followed up by Hollie May, who performs a gentle acoustic set that consists largely of cover tracks – but we can forgive her for this because her voice is phenomenally powerful. 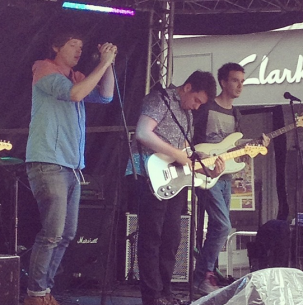 Rebel Attire signalled the start of a good run of acts. They performed a powerful set, but one that was a little by restricted by the restrained and controlled stage antics. Although their music was very get-up-and-go, the musicians themselves were sadly static and this detracted a bit. Faux Pas followed, with a fantastic indie-alternative sound that kept the atmosphere electric and the audience moving. More followed with superb sets from Parisian Youth Culture and Get Cubs, both of who produced impeccable indie-rock that is well worth checking out.

Today’s headliners were Southwall Corner Club, whose set was disappointingly slow to start. The band’s set plodded along until they got to a song called ‘Birds Of War’, which signalled the start of some upbeat pop-rock. But it wasn’t enough to win over the dwindling audience and the set fell short of expectations. By no means a bad act, but one that is definitely not prepared to be headline an event such as this. A mid-morning slot would have been better suited, with either PYC or Get Cubs as the ideal headliners for today.

Despite the disappointing end, the day was thoroughly enjoyable and a good end to the festival. The festival has without a doubt been hugely beneficial to the coverage of a lot of local acts and has put a lot of new talent on our radar – and hopefully yours too!

Take a look back over our report of day one here, or day two here.