As Blossoms reign at number one in the UK, we look at what new artists can learn from the outfit.

If you’ve never listened to Blossoms, you’re probably in the minority. The alt-pop band dropped their self-titled debut album early in August 2016 and, at the end of the first subsequent week, it has topped the UK charts. While everybody breaks into hysterics and begins to obsess about the band, new artists can take much more for Blossoms’ success – it’s not just a sign of changing tastes and times, it’s a signal of what is to come.

So what are the top three things bands can take away from Blossoms’ chart domination?

Indulge fans, not yourself:

The first thing that most people will notice about Blossoms’ debut album is the short length of the majority of tracks. This isn’t because the band got lazy in the studio or because they’re punk-rockers at heart, but rather because the band understand the distinction between a studio format and a live arena.

While it might feel artistically liberating to crack out a five-minute slow-burner track that resonates with musical brilliance and emotional depth, fans don’t want too much of that. Blossoms get around this by making chillwave-leaning closing track Deep Grass the album’s longest, clocking in at 4:45 – a length that makes it roughly twice that of earlier tracks. This is the band’s moment to give a slow-burning moment to fans, while tracks like Charlemagne and Blown Rose stick closely to the three-minute mark. Songs are typically short, sweet, punchy and successful, with any self-indulgence reserved for an extended version in a live set.

Build on what you know:

It’s not just you who listened to Blown Rose and, when singing along, almost broke out into Do they know it’s Christmas. Both melodies are certainly only a season apart, and that’s just one example: At Most A Kiss definitely has shades of Gwen Stefani’s The Sweet Escape locked in there.

Yet for the similarities, it’s not plagiarism – it’s just an influence that can be heard ringing through the music, or perhaps even a purposeful homage. The result of this is that, if listener’s feel something is familiar to them, they are more inclined to feel positively towards it – just look at Gotye’s shameless adoption of Ba Ba Black Sheep in that one inescapable hit song he had a few years ago. There’s a fine line between familiarity and adoption, as too between a nod and copyright infringement. Artists who tread the line carefully reap the rewards. 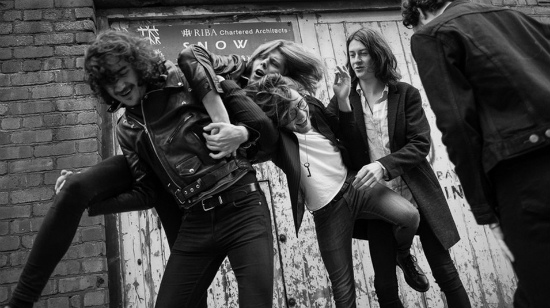 There’s an endless amount of ways that bands can drum up loyal support for an album release, as well as incentivise fans into not just streaming it on Spotify.

The most straightforward way is to, very simply, tour rigourously. Blossoms embarked on three headline tours prior to the release of their album, with a further one planned for shortly after the album launch. While Blossoms’ situation is uniquely complicated – it’s not common for a band to publicly lose their support act in a horrific accident – the amount of touring definitely played a key role in connected with as many people as possible before the album dropped.

In another interesting twist, the band also released almost half of the album as singles over the course of two years. With so many tracks becoming crowd-favourites in that time, the inclusion of those tracks alone destined the album for success. Offering two pre-order tracks as opposed to just one only sweetened the deal. Any band looking to emulate the runaway success of the album should follow those steps – get the audience to love you, give them what they know and love on the album, and then make it as rewarding a purchase as possible.