As a musical veteran superstar (or blackstar), Bowie is allowed indulgences most artists shouldn’t take.

Now, we’ve come to expect some pretty weird stuff from Bowie. For the last half a century he’s been astounding and entertaining us with both music and conceptual lifestyles (Thin White Duke, Ziggy Stardust, etc) that are out of the ordinary and out of this world. But even for him, Blackstar is a stretch. And no matter how much the video loosely ties into the Major Tom story, it’s still a stretch. 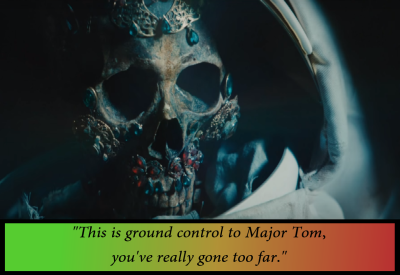 I’m all for creativity and restoring the art in music. But I also recognise when something is self-indulgent and grossly overblown – which, sadly, Blackstar is. It’s a progressive pop meets Jazz affair, for those who don’t have ten minutes of their lives to listen to it, that goes from bizarre ethereal artistry to something poppier. This poppier part is much more reminiscent of what we expect from Bowie but with nuances of experimentalism. So it has all the makings of a still great track, just tucked away in the centre of engorged artistry.

But being the veteran superstar of music that he is, Bowie is entitled to far more artistic liberties than almost any other artist is allowed. He’s allowed to delve into this type of progressive sounds without risking tarnishing his reputation or legacy. For better or worse, nobody can question Bowie’s output.

Which is wrong, really. The kind of progressive sound he’s got going on with Blackstar is one that spawned the punk movement decades ago. The prog-rock/psychedelia overblown conceptualism was dated by the late 70s, so to see Bowie embrace such an time-battered sound is strange for an artist typically ahead of the curve and on the forefront of futuristic sounds.

So what can new artists take from this? Don’t touch this sound until you’ve earned the adoration and reverence that Bowie has. At 68 with 53 years in the business, Bowie is only recently touching this type of sound. That should tell you all it needs to about the typical reception of ten minute prog-pop epics.

Bowie is entitled to wrap his pop sound in layers of ethereal bubblewrap. New artists? Not so much.