A modern twist on a classic sound 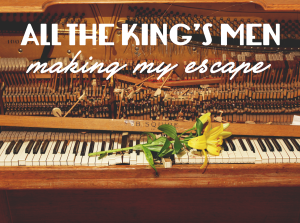 There’s a thing that we as humans do frequently, and that is yearn for the past. Oddly, there’s a popularity in music scenes to yearn for a past that we never experienced personally. This is why we get genre revivalists and genres being reinvented. Pop-punk reinvented punk, punk reinvented rock and roll, etc.

All The Kings Men’s latest EP is the past resurrected once more, bringing the general musical spirit of the 60’s to life again in a powerful way. Sounding like it was composed by a supergroup made up of The Doors, Creedance Clearwater Revival, The Libertines and Kings Of Leon, ‘Making My Escape’ is as traditionally psychedelic-rock as you can get without physically existing in the 60’s.

The opening call of ‘Fever’ sets the tone: from vocal effect to vocal delivery, it’s tinged in psychedelia with a modern twist. And that’s the tone which generally continues for five hugely enjoyable tracks, with a sound that unites music lovers both young and old and those in the middle of the spectrum. It’s a case a rare sound of unity.

Of course, you can’t expect a completely modern release that does justice to a sound born about half a century ago. Second track ‘City Lights’ is where the band slip into much more of a retro vibe than anything else, with a song that could easily have slotted comfortably into a late sixties music chart. It’s polished with a modern production, but musically it’s very set in the past.